The Northwest Gateway Neighborhood is one of ten Targeted Intervention Areas identified in the Brookfield Year 2020 Master Plan that was identified as an area where development and "redevelopment efforts can be best controlled to ensure the stability of the surrounding single family neighborhoods and where redevelopment investments can yield highest returns". The general project area is bound by City limits to the north, east and west, and Capitol Drive to the south, as illustrated below: 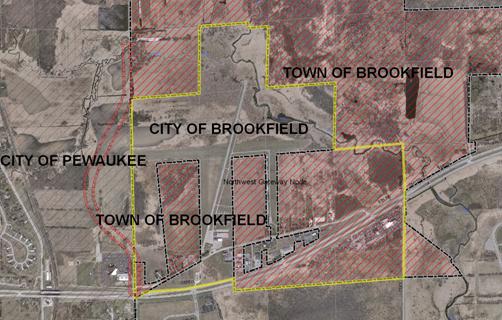 The Northwest Gateway Node is located at the northeast corner of Capitol Drive and Springdale Road and should be developed as a primary gateway to the western entrance of the City.

The Northwest Gateway Neighborhood Plan was adopted by the City of Brookfield Common Council on July 17, 2008.

A new Zoning District classification was created for the Northwest Gateway. A public information meeting was held on February 19, 2009 to present the newly created ordinance. A public hearing was held March 3, 2009 before Common Council to re-zone lands to the new Zoning District classification. The Common Council approved the re-zoning on April 7, 2009.